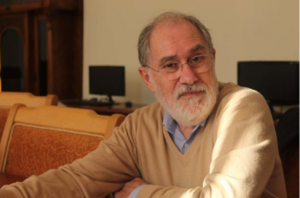 The Armenian visit of Massimo Gentili Tedeschi, the head of Milan’s BRAIDENSE National Library’s Ufficio Ricordi Music foundation was finished.  The goals of the visit were brought together during the round table summarizing the Armenian excursion and the professional meeting of the Italian specialist. Tedeski mentioned that music is a cultural value, which doesn’t have linguistic barriers: so it can be easily spread all around the world. In particular, there were return to the digitization of music literature and the searching system functioning in virtual domain, as well as about acquaintance of Armenian librarians with modern worldwide trends of cataloging. Tedeschi mentioned that the Musicological library in the Komitas museum is unique and expressed hope that owing to digitization it will be more popular as a result of which its resources can be fully utilized.
At the end of visit, the European specialist accompanied by Mrs R. Tonoyan, president of ALA, met Mr A. Amiryan,  RA Minister of Culture, at the meeting  were present Mr. T. Zargaryan, the director of NLA and Mr. N. Kostandyan, the director of Komitas institute- museum.   During the meeting was spoken about digitization of Armenia’s Music funds, protection and popularization. The specialist highly appreciated the meetings with the sphere’s representatives in Armenia and expressed willingness for further effective cooperation. Let us mention, that the Italian specialist was in Armenia with the cooperation of the Armenian Library Association and the Museum-Institute of Komitas and under the direct sponsorship of the Ministry of Culture of the Republic of Armenia. 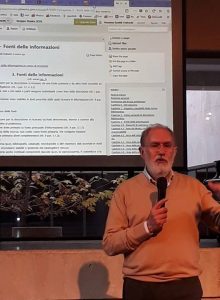 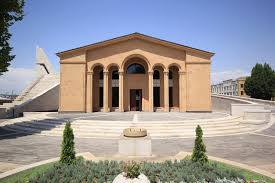 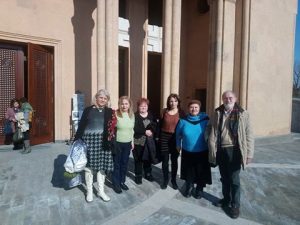 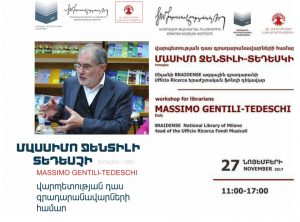 In cooperation with the Armenian Library Association and Komitas Museum-Institute, supported by the Ministry of Culture of Armenia on November 27 at 11-17  the  Komitas museum-institute hosted Massimo Gentili Tedeschi,  the head of the UFFICIO Ricordi Music Foundation. After library excursion the Italian specialist started his discourse with the theme “Modern trends of cataloging books”. During one-day master class the librarians got acquainted with modern library, in particular to the cataloging problems and modern approaches of music funds.  The speaker on the basis of worldwide examples presented the multi-lingual searching system of note music literature funds, the cataloging automation methods, forms and perspectives.  The librarians asked thematic questions to the speaker.  More than 100 participants from Yerevan and regions participated to the discourse.
At the end of the meeting the president of ALA Mrs. R. Tonoyan thanked busy specialist for transmitting to Armenian librarians’ actual knowledge and skills.

In cooperation with the Armenian Library Association and Komitas Museum-Institute, supported by the Ministry of Culture of Armenia on November 27 at 11-17 in the hall of Komitas museum-institute will be implemented a workshop for librarians with the heading “Modern trends of cataloging books”, which will host Massimo Gentili Tedeschi, the head of the UFFICIO Ricordi Music Foundation.
The Italian master during one-day scientific-practical meeting will present the problems and perspectives of modern library funds’ cataloging.
The aim of course is to share new applied abilities and knowledge to librarians through international experience. More than 100 librarians from republic will participate. 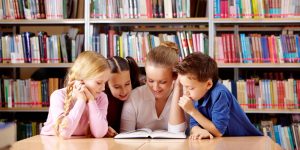 2004 RA government, the establishment day of Armenian Library Association, fixed as Librarian day. It is traditionally celebrated by various professional and cultural events in RA. This year again at the libraries of Armenia and Artsakh due to professional holiday corresponding to the content of the day will be implemented various events, which once more will highlight the old profession of librarian and its  contribution to the promotion of reading and appreciation of the book.

On July 28 at 10 a.m. in the Chinese corner of National Children’s Library after Khnko Aper the Armenian Library Association implemented IFLA’s Global vision workshop-discussion. The president of ALA Mrs R. Tonoyan welcomed the participant-librarians and presented the aim and persuasive of the meeting. Here was mentioned, that IFLA assumes the mission in creation of connected library field in different countries of the world which abilities and preconditions will be summed up on the basis of high-level meetings and discussions which, having the name of “Global Vision”, are implemented in different countries of the world.  The participants during the Armenian seminar discussed how will be the future of librarians, united and interconnected library field and how library being a social institute will hold out against future’s challenges.  The meeting of Asia Oceania regional workshop took place in Singapore. The last meeting of the stage was held in Madrid to which together with European representatives participated the Armenian representative too, who hosted such an organized seminar- discussion for Armenian librarians. During analytic and functional-informative professional discussion twenty librarians from Yerevan and regional libraries participated to collaborative team work and brief presented their notions and previsions of Armenia’s library future vision which will be summed up and reflected at IFLA submitted report.

With the initiative of IBBY Armenia and Armenian Library Association on July 5 at 10 a.m. at the Chinese corner of the National Children’s Library after Khnko Aper launched a 3-day workshop with the theme “Organizing and promoting reading among children and young adults in the libraries”. The president of IBBY Armenia Ruzan Tonoyan welcomed RA regional and capital’s 20 librarians and presented prehistory of the initiative. The course for librarians ,which serve to large groups of children, run the head of children’s section of Lyon Municipal library Violaine Kanmacher, who presented French experience of approaching children to library and involving them in reading. She also presented Lyon library’s professional practical skills of serving children age group, organizing the reading with individuals and groups. “The librarians should have special features to be able to treat different age children differently. Create predictions to visit libraries, to read, to love books”- based on the oretical- practical experience mentioned Kanmacher. Through videos she presented the usefulness of library for 6-12, 12-15 ages. During the course was spoken about the right of readers, typology of events about hour of fairy-tales, exhibitions, musical soundtracks, individual reading, which can be reason for long relationship between children and book.
Day’s lesson was finished by cultural impact, different librarians shared their expectations.

On July 5-7 Armenian Library Association NGO in cooperation with IBBY Armenia NGO is going to implement a workshop, which has the theme “Organizing and promoting reading among children and young adults in the libraries”. The workshop will run the head of Children’s Literature Section of Lyon Municipal library Violaine Kanmacher. The workshop will be both in French and Armenian. Twenty librarians from RA regional and community libraries will participate. The target group is librarians who serve children and young adults. The aim of workshop, for the benefit of development of library work in RA, is to give Armenian librarians new skills and knowledge in organizing children’s reading and library service of that age group by informing them the actual peculiarities of innovative, collaborative, initiative working style.   In order to ensure the dynamic effectiveness of the enterprise, librarians their new knowledge, skills and ability must put into practice with the work of that age group for the purpose to correspond modern demands. The course of studies will launch on July 5 at 10 a.m. at the National Children’s Library after Khnko Aper. 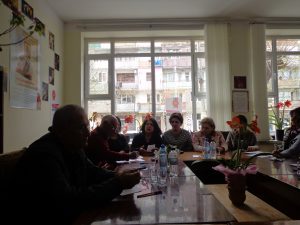 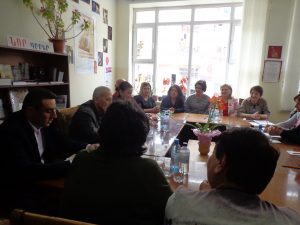 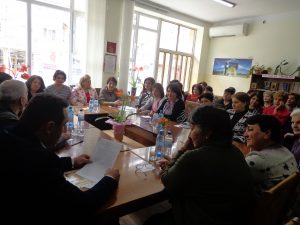 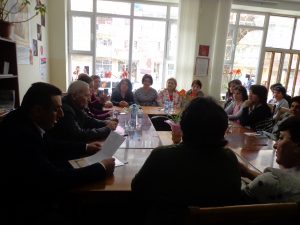 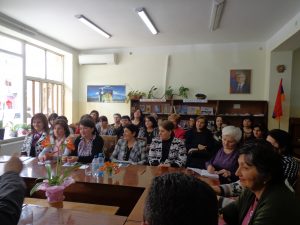 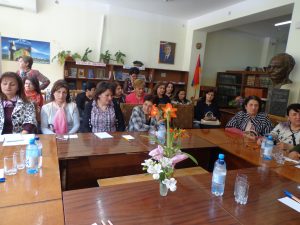 Within the frameworks of the National Library Week on April 21, 2017, at 1p.m. at Ararat province library after Ohan Chubaryan was organized a discussion by Armenian Library Association which had the theme “The library problems and search of their solution”. During scientific practical professional meeting-discussion had been talked about making library activity more focused and purposeful, finding solutions to problems of community libraries, innovative approaches, making library service up-to-date, the importance of consistent interactive master classes of librarians and reforming the culture of visiting libraries, improving quantitative and qualitative indices of reading, interlibrary cooperation and other library problems.
The president of ALA Mrs R. Tonoyan, vice-president Mr. R. Ghazaryan, the director of Ararat province library Mr.V. Petrosyan, librarians from Ararat, Vedi, Masis community and regional libraries were present at the discussion. At the end of discussion, the president of ALA Mrs.R. Tonoyan donated 25 books to the regional library. 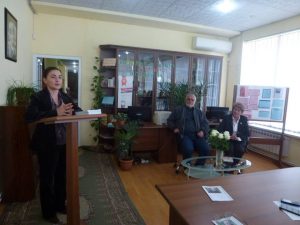 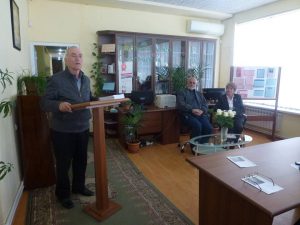 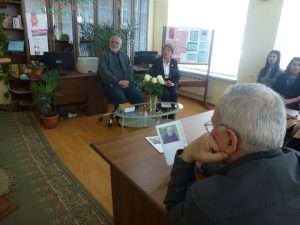 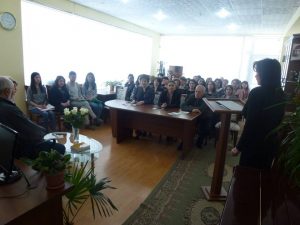 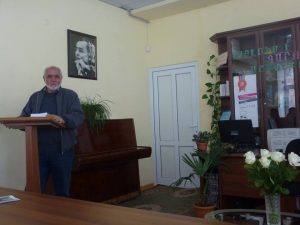 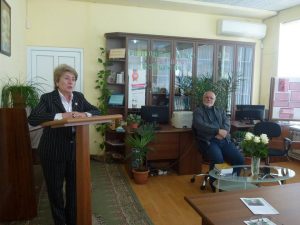 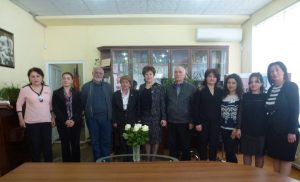 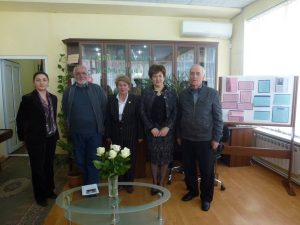 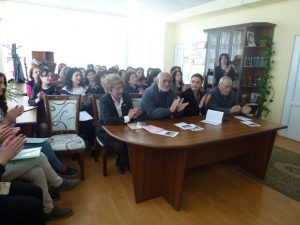 Within the framework of NLW on April 19 the president of ALA Ruzan Tonoyan and vice-president Rafik Ghazaryan with a children’s writer, poet Ruzan Asatryan and a writer, publicist Levon Blbulyan visited Aragatsotn province library after Vardges Petrosyan. The professional excursion was planned as a meeting with writers. Basically, it was a meeting in the crossroads of writer-book-librarian-reader, which crossing centre was the ALA with a professional-cultural week with the heading “Armenian Army-25”. ALA, loyal to its purport for evaluation reading and libraries, was implemented a book donation.
During the meeting was presented the creative ways of writers, were uttered words of gratitude and deep respect. The librarian’s of Ashtarak read the works of their country-woman, talked about her art, what value has her homeland, who with her enormous faith destines a powerful army and a strong homeland. The volunteers of Aragatsotn Youth Centre read the works of the writer, author of various songs Levon Blbulyan.
During the meeting were present readers, booklovers and journalists. The presence of ALA leaders encouraged the librarians to touch upon the professional problems, to present their views.
Let us mention that during the NLW will be implemented periodic excursions to other libraries of RA. 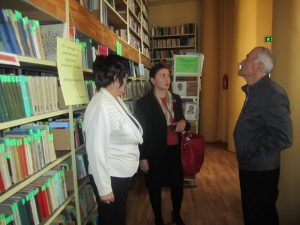 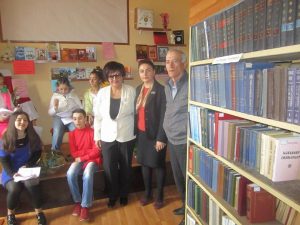 Within the frameworks of “National Library Week”, which is traditionally implemented by Armenian Library Association in RA, on April 18 the president of Armenian Library Association Ruzan Tonoyan and vice-president Rafik Ghazaryan visited Yerevan’s community libraries .The Week is devoted to the 25th anniversary of Armenian Army.
Loyal to NLW’s mission for evaluating books, reading and libraries, were implemented book donations. During the professional excursions to Armenian libraries they have been in №32 library of Shengavit administrative district where took place the official opening of NLW with the heading “Armenian Army-25″, which included fairytale theatrical reading, modern interactive games, riddle-predictions with the participation of children and in №17 library after Shushanik Kurghinyan where was held a lesson with the heading ”Qez carayely, hayreniq im veh, im vordiakan partqn e srbazan” /Serve to you, my homeland, is my filial holy duty/ was accompanied by reading children’s letters-wishes addressed to the soldiers.
During the event the leaders of ALA watched the exhibition with the heading “Parq hayoc banakin”/Glory to Armenian army/, where were presented the works of young adults created with patriotism’s motives.
Let us mention, that during the annual professional-cultural week are planned discussions about library problems, meetings, matinees dedicated to cultural jubilees and ceremonies at Republic’s regional, community, professional as well as higher educational institutions’ libraries and periodic excursions to Armenian libraries.